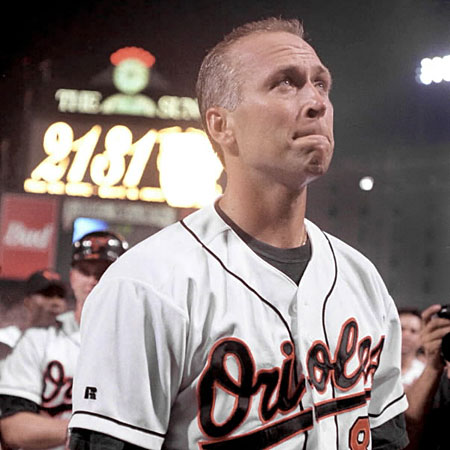 Cal Ripken, Jr. and his friends hit for big money by betting Mine That Bird at Churchill Downs

Sure playing in 2,632 straight major league baseball games was quite a feat, but what’s really impressive about Cal Ripken, Jr. is that he is one of the few horse bettors to hit it big on Kentucky Derby winner Mine That Bird.

Back in the day, Ripken, Jr. no doubt played winning baseball by using the science behind scouting reports and probabilities, but when it comes to picking the ponies he seemingly puts his money on names, numbers and hunches. But it doesn’t matter because he’s having just as much success hitting winning horses as he had hitting fastballs during his Hall of Fame baseball career.

While doping out the Derby in his Churchill Downs suite on May 2, Ripken connected with so many things about Kentucky Derby winner Mine That Bird that the horse did everything for Ripken except whinny the melody to the Baltimore Orioles fight song.

Ripken, who regularly attends the Derby with his wife Kelly and their friends, won large sums of money by betting the 50-to-1 shot winner that shocked the horse racing world. According to the Baltimore Sun, a Ripken spokesman named John Maroon confirmed that Ripken and many others in the suite cashed on Mine That Bird.

And when you think about it, Mine That Bird was a standout for Ripken based on three solid hunches.

Ripken played for the Orioles, who are often referred to as “the birds” by baseball announcers and headline writers. Jockey Calvin Borel, who rode the horse, shares Ripken’s first name, and Mine That Bird’s saddle cloth number was #8, which was the same digit Ripken wore on his back while playing in a Major League record 2,632 straight baseball games from 1982-1999.

Yep, it looks like baseball’s Ironman is solid gold at the racetrack.

© Copyright Maiden King, 2009. Written exclusively for Maiden King. Not to be duplicated or reprinted, especially by a website called Our Blogs Kentucky Derby Everything You Need To Know.