In Vegas, being hot is only fun at the gaming tables 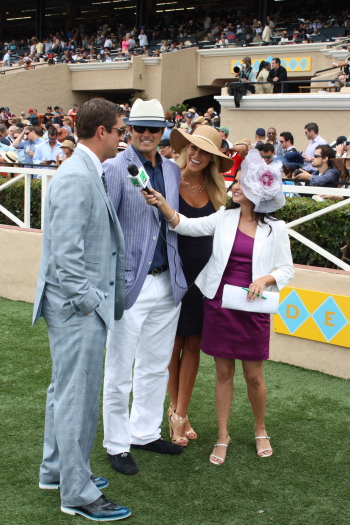 It’s one trip that never disappoints.

This time of year, the painful Las Vegas sun scorches any fool who dares venture from the 72-degree chilled air of the casino. Most organisms aren’t made to live in this overwhelming desert summer heat.

That’s why the area surrounding Las Vegas looks like the surface of the moon: aside from a few cactuses and a lizard or two there’s nothing alive out there.  Only God knows how wild horses survive here.

Certainly, human beings weren’t made for this. Our bodies are mostly composed of water.  We like drinking water, looking at water and submerging ourselves in it. A little humidity and a cool breeze is nice every now and then, too.

Water makes us happy. Don’t you find it curious that people at the beach always seem so relaxed and good natured, while the residents of  the desert climates of the warring Middle East are often angry and downright hostile?

Even if Del Mar’s Opener wasn’t one of the best days of the year at any track in America, all arrows were pointing to San Diego for me last Tuesday.  Walking the aisles at a Las Vegas-area Costco, I found $100 coupons for sale at the Hyatt Marina Bay that Costco was selling for $80. And when I booked the room on Costco online, they knocked off another 10 percent and threw in a $25 gift certificate upon arrival. So, this $200-a-night room – right on breezy, 65-degree San Diego Bay – ended up costing just slightly more than the La Quinta Inn built under the screaming, soot-spewing jet engines swooping down at LAX.

I rented a car – not that my 2002 Acura wouldn’t make it or anything — but if a car depreciates by mileage, then why not put the miles on the one Enterprise owns and not mine? Then I pointed the vehicle toward Del Mar and pulled away, noticing that my car’s temperature gauge read 113-degrees.

As I drove through State Line, it was baking.  And in Baker, it was roasting. By the time I hit Barstow, I was cooked.

But gradually, after I passed San Bernardino the temps started to cool down and when I finally got to San Diego five hours later, it was all worthwhile. I was greeted with a cool breeze of heavy, oxygen-rich humid sea air, chilled down to 65 degrees.

Go ahead, take a deep breath near the ocean in San Diego and you’ll feel like you can run a 26-mile marathon or fight for the Heavyweight Championship of the World. In Las Vegas, you take that same deep breath, and all you do is cough up desert dust or get a mouthful of  second-hand cigar smoke.

Before going to Del Mar’s Opening Day, I worked up a sweat by running a few miles through the misty Mission Beach air, then I dove into the frosty Pacific Ocean. Ahhhhh.

When I got to Del Mar, things just got better. I was allowed to go into the paddock area where former movie stars like Bo Derek were chatting with owners and race fans. While in the winner’s circle, a young woman who was Miss California 2009, was with two NFL quarterbacks. 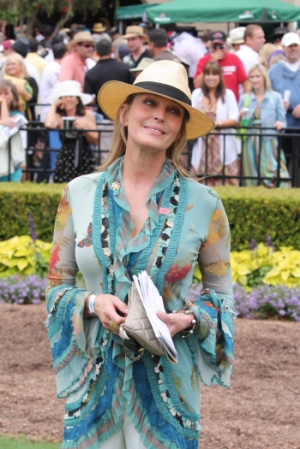 Horse racing’s own celebrity of sorts — trainer Bob Baffert — seemed to be everywhere. But mostly he stood not too far from the saddling area, eyeballing his Thoroughbreds while entertaining the partners in the expensive animals that he likely persuaded the men to buy.

Looking around, a record-setting crowd of 45,000 showed up. And everybody seemed to be dressed up and wound up. As the gates shot open for the first race, the customary huge Opening Day cheer went up from the overflowing grandstand.

And in the second race, the same thing happened. Only fewer people cheered. But then somebody must have said something because the third race went off without much fanfare.

As the day went on, drinkers sipped their cocktails, TV personalities interviewed trainers and jockeys, and others just soaked in the tremendous atmosphere.

Yeah, Del Mar, California. This is the kind of place where human beings thrive.