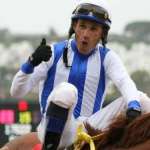 I was looking forward to betting against morning line favorite #8 Welter Weight, who was a first-time starter that was purchased for $1 million at the Keeneland September sale in 2010. Trained by Steve Asmussen, this colt had two extraordinary 6-furlong workouts: the first stopped the clock at 1:11-and-1/5th seconds on Dec. 28 and the second was run in 1:11 flat on Dec. 21.

Very likely Welter Weight is going to be a good horse that earns a lot of money for owner Stonestreet Stables & Bolton. But my records show that horses running in their first races at less than 2-to-1 are very bad wagers. Some of the information I keep includes the prices paid for unraced horses, which is found in the past performances of the Daily Racing Form. Debuting runners that were bought for $500,000 or more ran 52 times in Southern California at less than 20-to-1, yet only won 10 races. If you bet them all, you got back just 48 cents for every $1 wagered. And it was just as bad for those less than 2-to-1.

Moving on, I whittled the field down to two contenders: #4 Consulado, who ran strongly last time, and the Bob Baffert-trained #11 Bobby Flay.

In addition to Welter Weight, five other first-time starters were in this 11-horse field. Many of them had fast workouts and they could have been any kind, so I planned to watch the board for betting action. If any of them went off between 10/1 and 19/1, I would place small wagers on them.

When watching the replay of Consulado’s first race on Dec. 17, I saw that his 81 Beyer Speed Figure was earned while going three-paths wide on the turn. Adjusting for the lost ground, I eased the speed figure up to 83, which was just one point away from the 84 median Beyer Speed Figure that wins these types of races. I determined that Consulado was obviously solid and hoped to get a gift of a price of 5-to-2 when Welter Weight was heavily bet.

Then I turned to Bobby Flay.  Baffert does excellent work with 3-year-old horses in maiden special weight races, however his colt needed significant improvement to win. He was in the same Dec. 17 race that Consulado came out of, but Bobby Flay ran just a 74 speed figure.

This scenario came about because the public was betting the other first-time starters like they had no hope. The odds on those five horses ranged from 27-to-1 on Carlsbad Mountain to 84-to-1 on Malibu Affair.

In the running of the race, Consulado eased to the early lead, was never challenged and glided home under a hand ride. The 7-and-1/4th length victory looked impressive, yet earned just an 86 Beyer.

Welter Weight was second after getting stuck behind a wall of horses at the top of the stretch leading to a situation where jockey Julien Leparoux couldn’t find a running lane until the race was almost over.

At the betting window, I needed 5/2 on Consulado, but passed because his odds were too low. None of the first timers fell into my betting range, but my $200 bet on Bobby Flay did kick in at 9/2.

To watch a replay of this race go to www.calracing.com.

The way I see it, this race is #8 Welter Weight versus the world.

So, I am hoping Welter Weight gets pounded down to 6-to-5 at the windows, which will raise the prices of contenders like #4 Consulado and #11 Bobby Flay.

These runners have performed well in their only lifetime starts and wouldn’t have to improve much to win. And who knows if a monster is lurking among the other five first-time starters — so I will have to consider them if the price is right.