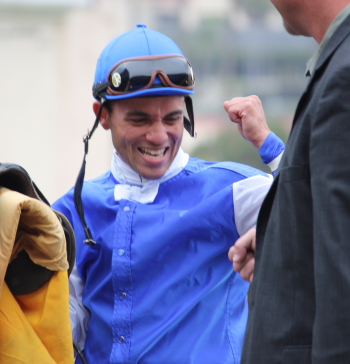 Anybody wagering on these maiden races better take a close look at the horse jockey Joel Rosario is riding. Rosario’s new agent Ronnie Ebanks called him the best young rider he has ever seen, and I am starting to believe him.

Coming into the race, #13 Offlee Wild Boys had competed four times in maiden special weight company, showing speed in most of those events before fading. In this $40,000 maiden claiming race, the switch to Rosario and the drop in class were helpful, as Offlee Wild Boys broke on top then settled two lengths off a three-way speed duel on the backstretch.

Rosario made his move three paths wide on the turn and blew by leaders #6 Bold Fresh and #1 Tahoe Yodeler by the time the field hit the top of the lane. Offlee Wild Boys stayed strong in the stretch without being challenged to prevail by 2-1/2 lengths.

Before the race, I was watching the odds on a pair of first time starters — #5 Call Me Later and #10 Warrens Heartthrob for possible bets. Also, #1 Tahoe Yodeler, #9 Beer Friday and #12 Swiss Tart were all possibilities at the right odds.

However, only Call Me Later, at 5/1, fell into the odds range. He ran in the middle of the pack then made a mild run to finish fourth without ever challenging for the win.